The COVID-19 pandemic has changed our lives on so many levels – and we’ve spent much of the past two years at home baking bread or binge-watching Netflix.

There were some who were bound to pick up a new hobby or learn a new language. For this family, however, ambition knew no bounds as they spent their time undertaking the ambitious project of building a four-seat aircraft from the ground up.

Ashok Aliseril, 38, his wife Abhilasha Dubey, 35, Tara, 6, and Diya, 3, weren’t going to let boredom get to them and instead invested their time in something more meaningful.

Ashok, a skilled pilot, with the help of his family, spent almost two years building the plane – with just the instruction manual and YouTube videos to guide him, The Telegraph reported.

The 38-year-old engineer from Essex in England and his wife Abhilasha had wanted to buy a plane capable of accommodating them and their two young daughters. However, they could not find a suitable option in the market. 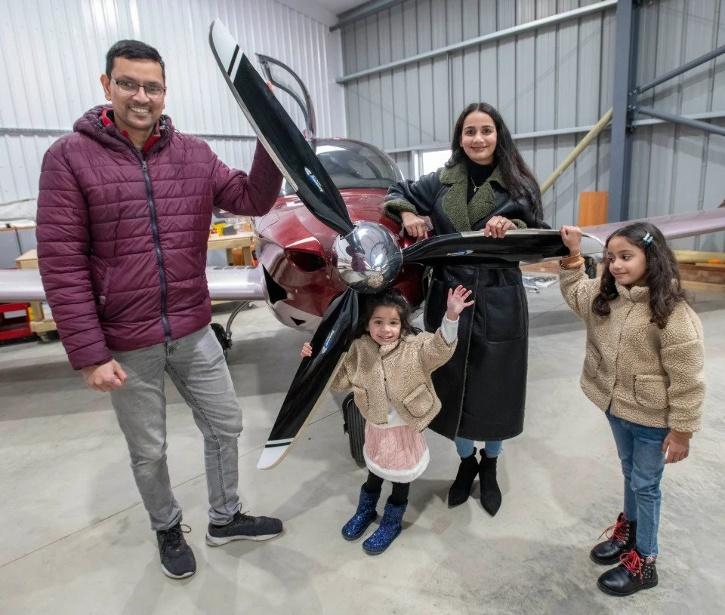 So Ashok decided to take matters into his own hands, literally.

He found a kit plane that suited their needs and flew to South Africa to test the vehicle, before ordering it and having it shipped to his backyard.

The pieces arrived in March 2020, just when the family found themselves grounded by COVID.

So, instead of spending quarantine making banana bread or embarking on large-scale sourdough, the family built an airplane.

Almost two years later, the result is an incredible red and silver number with luxury seats and plenty of legroom.

The couple helped fund the project by saving money on school breakfast clubs, travel and socializing.

“After work, there was literally no time to waste on the drive to the shed – because it was right there in our back garden,” Abhilasha said as quoted by Metro. “So Ashok used to go out after work from 3 p.m. and stay there until 9 p.m.”

The couple are now hoping to travel to the Isle of Wight for the summer holidays, while Ashok hopes the plane will help him get to Manchester United games.